In Berlin’s Westend, the immediate neighborhood of the Georg Kolbe Museum, there are a variety of striking architectures and urban structures that illustrate the various approaches to lifestyle and housing that were experimented with during the last century. Inspired by sculptor Georg Kolbe’s close relationship to architecture, the audio walk reveals impressions of living behind numerous facades, explores urban structures and architectural monuments, some of which have been converted, revitalized, and became iconic; others which are vacant, built-up, and almost forgotten. From the utilitarian-modern Künstlerhaus, which houses today’s museum, the route leads past Le Corbusier’s habitation machine, over the hilly terrain of the Teufelsberg, to what is arguably Berlin’s most controversial sports facility, through historic settlement patterns and metropolitan landscape architecture, as well as to the doors of notable Westend apartment buildings.

The Georg Kolbe Grove – Historical Layers
Once an undeveloped green belt that has been redesigned several times over the past decades, the heritage-protected landscape park is now a freely accessible exhibition space displaying five sculptures from Georg Kolbe’s late work. A walk between bronzes and canopies.

Built Community or Failed Utopia – The Unité d’Habitation, Type Berlin
Modular and flowing urban space: unloved for decades by the people of Berlin and even by the architect himself – the Unité – an example of Berlin’s post-war modernism, today continues to confront its inhabitants with their collective and individual needs. A look into everyday life in the colossal housing machine.

Officers’ District at Heerstraße, Residential Estate Westend – Standardised Housing
Settled between parked cars and the Grunewald forest, the residents of this housing estate are campaigning against the impending threat of demolition. A foray through a progressive housing typology in which light, air and sun play the leading role.

House Poelzig – Hans? Marlene!
In two respects, the architect Marlene Poelzig was deprived of receiving recognition for her work in the history of the house: now the building, which interweaves living and working spaces of the 1920s, is to be demolished. However, resistance is forming – a local inspection.

Three layers of Berlin – the Teufelsberg
From the top of a mountain comprised of 26 million cubic meters of wartime rubble and debris, Berliners could ski, grow wine – while the Allies could spy on the eastern part of the divided city. The future of the iconic wiretapping station is uncertain. Will there be a museum on its site? A view from afar.

Eichkamp – Collective Student Dormitories in Grunewald
On the site of this heritage-listed campus, residential buildings are freely distributed across an extensive park landscape. However, inside the buildings, the functions of work and life are organized in a tightly confined space. A walk through a colourful place of student life in the Westend.

Messegelände and Haus des Rundfunks — Two Radiant Heritage Buildings
A few years after the invention of the radio, the Haus des Rundfunks was built – today, it is heritage-listed, demanding a laborious restoration of its unique ceramic facade. Insights into a house that shines beyond its mere materiality.

ICC Berlin – What’s happening there now?
This futuristic megastructure triggers various associations: Armadillo, spaceship, excavator… One of the most expensive building projects in post-war Germany has become an integral part of Berlin’s urban landscape – yet it has long been empty. A glimpse into an uncertain future.

Apartment House Kaiserdamm – New Urban Residential Living
“No house like any other” – Hans Scharoun’s first work in Berlin embodies the search for new forms of housing and living in the 1920s. It went down in architectural history as an experiment in urban living for single people and childless couples: Communal canteen replacing everyone’s own kitchen?

Theodor-Heuss-Platz – History in the Fast Lane
An urban square symbolising the car-friendly city: with a three-lane roundabout and a letterbox for motorists. An all-around view from the perspective of a pedestrian.

Branitzer Platz – Heritage, Fire Pond and Vegetable Patch
Created as the centre of the noble villa district, this ornamental square has been at times – more and sometimes less – preserved over the decades. A walk around the garden monument, which the likes of Marlene Dietrich enjoyed.

The First Practising Female Architect in Germany – Emilie Winkelmann, a Role Model
As a woman, she was not allowed to study architecture and therefore initially concealed her first name. Eventually, however, Emilie Winkelmann planned and built remarkable buildings as a successful female architect – some of them in the Westend. Making connections between a pioneering trailblazer, to the status-quo of this male-dominated discipline. 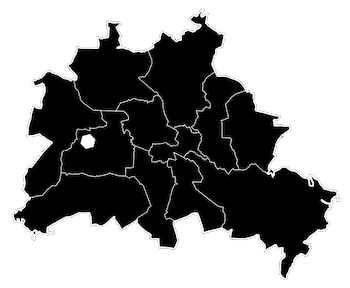 DOWNLOAD DRIFTER TO DISCOVER THIS TOUR
AND MANY MORE

A collaboration between the Georg Kolbe Museum and POLIGONAL – Office for Urban Communication.